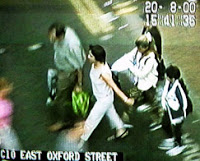 from this is london: London has 10,000 crime-fighting CCTV cameras which cost £200 million, figures show today.

But an analysis of the publicly funded spy network, which is owned and controlled by local authorities and Transport for London, has cast doubt on its ability to help solve crime.

A comparison of the number of cameras in each London borough with the proportion of crimes solved there found that police are no more likely to catch offenders in areas with hundreds of cameras than in those with hardly any...

"These figures suggest there is no link between a high number of CCTV cameras and a better crime clear-up rate.

We have estimated that CCTV cameras have cost the taxpayer in the region of £200million in the last 10 years but it's not entirely clear if some of that money would not have been better spent on police officers.

Although CCTV has its place, it is not the only solution in preventing or detecting crime.

Too often calls for CCTV cameras come as a knee-jerk reaction. It is time we engaged in an open debate about the role of cameras in London today."