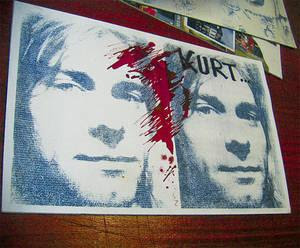 "just because you're paranoid, don't mean they're not after you"

from digital journal: It has been 15 years now since 27-year-old Kurt Cobain ran away from a treatment center in Los Angeles, flew to his 'heart' home in Seattle, and first shot himself up with heroin, and then shot himself to death with a shotgun. Kurt Cobain was just one of the long line of 27-year-old rock stars to blaze like a shooting star through Earth's atmosphere to gloriously high heights, only to extinguish (themselves mostly) and die at a tender age. Brian Jones. Jimi Hendrix. Janis Joplin. Jim Morrison. He was in good company, indeed... However, as we all know, Cobain was a tortured soul who was bipolar and suffered from manic depression. He was also a drug addict, who had run away from the Exodus Recovery Center a few days before and after administering a lethal dose of heroin to himself, took a shotgun that a friend had bought for him just days prior, put it under his chin and pulled the trigger.