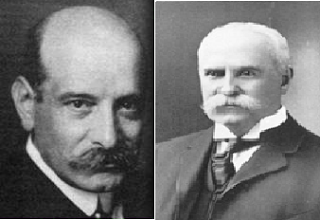 It's "JUST AS FEDERAL AS EXPRESS" WEEKEND to celebrate efforts - bringing the news to people -  the Federal Reserve is a private bank!  The Federal Reserve is only as Federal as Federal Express!   A brief synopsis of how a private bank secured right to print the money of the United States, is available under title:  "1913: How The Fed Was Shoved Down America's Throat!" There's nothing better than getting the facts in fewest possible words, this synopsis exceeds expectations!  The Federal Reserve System - its creation - begins with the banking Panic of 1907, which brought cries for a Central bank.  The blatant financial manipulations were not lost on observers such as Senator Robert Owen, who in 1911 said, "(The Panic) was brought about by a deliberate conspiracy for the enrichment of those who engineered it....I regard it as treason against the United States....a few men control the power of expanding or contracting credits. This unrestrained power means the power to create panics and coerce this country politically." The Oklahoma Senator called for an investigation, but in the end, amounts to little more than a public scolding.

The modus operandi of moneyed interests provides description of - The Hegelian Dialectic - under the more fanciful title:  The Three Step Dance:  Crisis - 'Bipartisan Commission' - Solution in the synopsis.  The present writer believes - dialectic - represents little more than a ploy, but a style everyone should recognize.   Banking scoundrels offer bait - easy money - then create crisis when they tighten credit and offer a bogus solution, essentially, what they want!  A federal act in 1908 created  The National Monetary Commission  (NMC) to study panic of the year before and make recommendations.

Synopsis provides insight into inbred Eastern establishment and their self-interest with following observation about the NMC chairman:

"The Chairman of the Commission is Senator Nelson Aldrich [picture, right] (who's daughter will one day be the mother of the 5 Rockefeller sons, David, John III, Nelson, Winthrop, & Lawrence)."

Money represents such a large factor in their lives, they can only marry money! It's not that their selfish, it just creates too many problems - right!   The selfish motives behind the NMC, seems revealed, when Frank Vanderclip confesses later to the Saturday Evening Post:

"There was an occasion, near the close of 1910, when I was as secretive, indeed, as furtive as any conspirator. ... We were trying to plan a mechanism that would correct the weaknesses of our banking system as revealed under the strains and pressures of the Panic of 1907. I do not feel it is any exaggeration to speak of our secret expedition to Jekyll Island as the occasion of the actual conception of what eventually became the Federal Reserve System. … Discovery, we knew, simply must not happen, or else all our time and effort would be wasted. If it were to be exposed publicly that our group had gotten together and written a banking bill, that bill would have no chance whatever of passage by Congress."

The bill was written by Paul Warburg (picture, left).  A 1952 book by Eustace Mulliins, "Secrets of the Federal Reserve" (pdf), provides great description in Chapter One of 1910 Jekyll Island meeting.  NMC recommendation, is described, in accurate if somewhat derisive terms by the synopsis below:

"The main recommendation of Aldrich's National Monetary Commission is to establish a Central Bank with monopoly control of credit and currency issue. The privately owned Bank would create money out of thin air and lend it local banks and the government at interest."

The above description is the right to print granted later in the Federal Reserve Act. The Aldrich Bill never makes it to the floor of Congress because there's so much resistance, everyone recognized who the bill favored! The perpetrators don't give up, another aspect of their style everyone should recognize, the reworked bill gets renamed "The Federal Reserve Act."  "The Act was signed by President Woodrow Wilson - under the influence of Colonel House - founder of the CFR (controlled by Rockefeller) -passes on December 23, 1913, " reveals another article, "Federal Reserve Act: the most Influential Act in US/World History since the Constitution."

Congressman Charles Lindbergh Sr. summarizes what virtually amounts to a crime below:

“This is the Aldrich Bill in disguise ....This Act establishes the most gigantic trust on earth. When the President signs this bill, the invisible government by the Monetary Power will be legalized. The people may not know it immediately, but the day of reckoning is only a few years removed. The worst legislative crime of the ages is perpetrated by this banking bill.”

The synopsis is a must read for anyone who wants to know more about secretive enterprise called "The Federal Reserve."