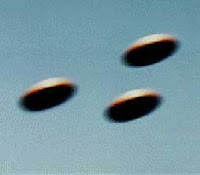 On March 17, 1950, between 11am and noon, half of the small town of Farmington, NM peered skywards and pointed to UFOs directly overhead--for a third consecutive day! High winds and dust storms prevented clear visibility according to a Farmington Daily Times article of the following day. Hundreds witnessed the objects that seemed to play tag and maneuver at 90 degree angles. Witnesses could attest the objects to be "saucer shaped " as some would fly on their edge to reveal their round form. The UFOs would also fly in formation with a larger and faster red leader in front. Speeds of the objects were estimated at 1,000 mph and flying at heights of 15-20,000 feet and numbered, by witness accounts, anywhere from dozens to hundreds. The sightings are popularly known as the "Farmington Armada".

James E McDonald, a noted UFO researcher, documented witness accounts 17 years later and concluded the objects could not be dismissed as cotton in the air, plasmas or the break up of a Skyhook balloon. McDonald checked with authorities and found no Skyhook Balloon launches for the time period, although a balloon break up still stands as the most likely "official explanation". There is a nice five minute video of Stanton Friedman, famous UFO investigator, who addresses the Farmington incident, beginning at the 2:30 mark.