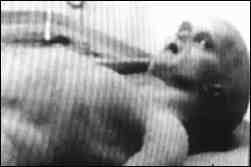 ﻿In 1995, ten million Americans watched "The Alien Autopsy", but producer Ray Santilli admits there were only two or three "authentic" frames of "the aliens". The remainder of the film was staged. This week's Daily Mail headline provides an echo of the past with "The memo that 'proves aliens landed at Roswell'... released online by the FBI". A sensational headline designed to draw readers. You can view the memo on YouTube, where someone does the navigation for you. The memo is at the FBI website under a subdomain called "The Vault". Is this what the internet has come to... self-serve disinfo?

Nancy Atkinson, a Universe Today writer, provides a more accurate assessment in "FBI Memo Does Not Prove Aliens Crash Landed in Roswell". "While the memo is genuine...it is not new, is not secret...having been released in 1976 by the FBI...[and]...a third-hand account from agent [Guy] Hottel reporting what an Air Force investigator was told by an 'informant'." It's disconcerting the FBI memo is presented as breaking news. It's clearly deceptive! Is it setting the stage for an alien psyop?

You can read the opinions of veteran UFO researchers in a previous post here, who came to believe aliens are mostly a psyop a means towards a one world government. If you missed the autopsy the first time around, you can view it on YouTube: "The Alien Autopsy". In this case even a psyop can be entertaining!