1976 secret apollo space mission to far side of moon 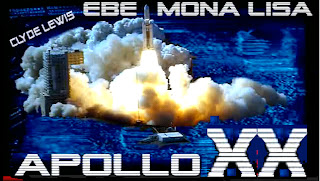 In 2007, videos appeared on You Tube that claimed to be images from secret Apollo XX mission to the far side of the Moon. Images include a well-preserved female astronaut recovered from a relic alien spacecraft estimated at one and a half billion years old. Ground Zero Live host Clyde Lewis discusses alleged mission with producer Olav Phillips, who finds it to be “an expensive one” – if a hoax. Phillips sees just enough credibility in story to make a good mystery or conspiracy! A 2007 UFO Data magazine article, “Apollo 20 Controversy,” provides an excellent recap.

“… When they landed on the Moon, they saw a deserted and ruined city, ‘full of scrap’, as Rutledge put it. He and Leonov entered the derelict spaceship and also a triangular one nearby…The craft was pitted with craters and other damage. Inside, they found evidence of plant-life and ‘triangular rocks [that] emitted “tears” of a yellow liquid which has some special medical properties’…They also found alien bodies. The remains of small creatures, about 10 cm long, were found in glass tubes that ran the length of the ship and two ‘full-size’ aliens were found. Unbelievably, he claimed that one of them, a female, was still alive and returned to Earth!“

A caller to Lewis’ program witnessed launch of a Saturn V rocket in the seventies from Vandenberg AFB. Saturn V rockets were used in the Apollo program. The present writer leans towards a disinfo campaign or a psyop, conceding to Phillips much effort invested in videos. It’s a great mystery and still entertaining even if hoaxed!