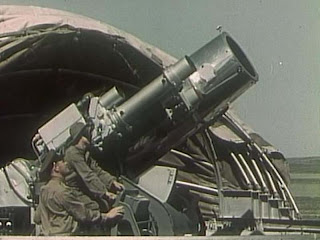 Clark C McClelland, former ScO Space Shuttle Fleet, writes in a chapter from his book Stargate Chronicles: "Terra-3 Soviet Strategic Space Weapon Was Used to Attack U.S.A. Space Shuttle Challenger Spy Mission," about a volatile incident of Cold War era spying that almost ignited World War III! On Oct. 10 1984, Space Shuttle Challenger was engaged in a spy mission to take photos with a large format camera of the Sary Sagan anti-ballistic installation (pictured) near Lake Balkash in Kazakhstan. The Soviet Defense Minister concerned about American spying, ordered Terra-3 laser fired upon the Shuttle! The laser beam caused malfunctions on shuttle and sickened crew members, and resulted, in a formal diplomatic protest. McClelland summarzes Russian response, "the U.S.S.R. recognizing that the order given by their Defense Ministry under the watchful eye of the KGB had caused a very dangerous international incident and quickly responded to the angry United States protest by saying that the response taken by their government was only an action to annoy the crew of the space shuttle during their spy mission over sovereign Soviet territory. It was not meant to harm anyone on board the spacecraft. Of course it wasn’t, yeah, sure!" The former NASA employee also shares opinions on possible sabotage involved in NASA tragedies. You won't see sabotage in the mainstream press, so it's worth the read!