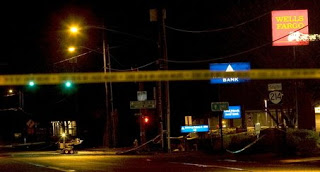 from times of india: Two police officers were killed and two people were injured after a bomb exploded at a bank in the western US state of Oregon, authorities have confirmed. The fatalities included a bomb disposal expert and a police chief who died after a suspicious package exploded at a branch of the West Coast Bank in Woodburn, 30 miles (48 kilometers) south of Portland, on Friday. The bomb also seriously injured a 46-year-old police chief and a female bank employee, Oregon State Police said in a statement. No individual or group has claimed responsibility for the bombing and authorities have issued a 35,000-dollar reward for information leading to the capture of those responsible.

from cnn: The 5:24 p.m. explosion at West Coast Bank came after the nearby Wells Fargo Bank had received a threatening telephone call Friday morning from an unknown person, Oregon State Police said. When authorities arrived at Wells Fargo Bank, they discovered a "suspicious object" that was later determined not to be dangerous. Their investigation led to a suspicious device outside West Coast Bank, and all but two employees were evacuated from the bank, Hastings said. It was not immediately clear why those two employees were not evacuated. The device was brought inside, and it exploded, Hastings said. He said it was not clear why it had been brought inside. Bank President Bob Sznewajs said Friday that his employees told him authorities "scanned it outside, then brought it in."

cryptogon breaks it down bluntly:
Where else but America would the cops be so stupid that they would bring a suspected bomb INSIDE the premises of the intended target!? This is Darwin Award Hall of Fame material right here. It will also be an excuse for cops to shakedown lots of clueless hippies who had absolutely nothing to do with this. 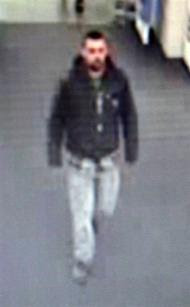 from oregonian: Authorities arrested a suspect in the Salem area Sunday evening in the Woodburn bank bombing that killed two police explosives experts and injured the town's police chief and a bank employee. The name of the suspect, address of the arrest or any details about the investigation were not released "to protect the integrity of the investigation and the safety of officers continuing to investigate this crime," a news release from the Marion County Sheriff's Office said.

update2: woodburn bombing a father-son job
from oregonian: The bomb that ripped through a West Coast Bank branch in Woodburn on Friday and killed two police officers was the product of a plot that dates to at least November involving a father-and-son team, according to information released by authorities Tuesday. Investigators say the son, Joshua Abraham Turnidge, 32, of Salem, secured disposable cell phones, prepaid phone cards and other materials for building the bomb and a decoy. They allege he was involved in making and placing the bomb that exploded as officers dismantled what they mistook to be a hoax. Authorities also contend his 57-year-old father, Bruce Turnidge, is connected to the crime, although the alleged extent of his role has not been disclosed.

update3: victim made an error
from oregonian: National experts say they were surprised to learn that an Oregon State Police Bomb Squad technician was confident the green metal box found outside a Woodburn West Coast Bank branch was a "hoax device" based solely on his inspection using a portable X-ray machine. "An X-ray is just not 100 percent. You may miss something because there's so many variables," said Hal Lowder, an Atlanta-based explosives expert. "It sounds like he made a judgment call, just a bad call. "I hate to say bad things, but taking a bomb apart is just not done anymore." The bomb exploded after state police bomb technician William Hakim carried it inside the bank and then tried to open it with the help of a Woodburn police chief and captain.