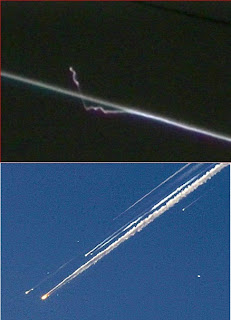 On February 1, 2003, Space Shuttle Columbia broke up upon reentry just after 9am (bottom picture) over much of central and eastern Texas. The official story reports that insulating foam damaged heat-resistant tiles on left wing of Columbia just after launch is the suspected cause. In an entry at the Living Moon website, "Columbia Taken Out by Lightning," provides image taken by amateur, who watched reentry in the hills above San Francisco (top picture). "In the photograph a purplish corkscrew streamer merges with the plasma trail of the shuttle, which then brightens significantly," entry describes a compelling alternative account. Space Lightning may be a sufficient and more adequate cause - but that has largely gone ignored. There is also a HAARP rumor where the storyline goes: North Korea timed a missile launch, so US defenses left little choice but to activate missile shield (HAARP umbrella) to neutralize the incoming missile. It seems fantastic until reports of a North Korean missile found in Alaska just a month later came out with varied accounts here and here. Space Lightning or HAARP may sound far out but aren't they better explanations, when compared to a few missing heat-resistant tiles?