2008 coronal mass ejection as never seen before in hi-def 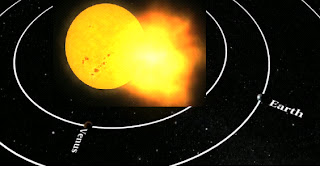 New detailed imaging of Coronal mass ejection (CME) adds new definition and clarity to solar event. A pair of wonderful Universe Today articles provide insight into phenomena as well as spectacular imaging! A video in, "Watch a Solar Storm Slam in Earth," represents continuous tracking of coronal mass as it travels from initial ejection to when it hits Earth's outer atmosphere--impressive! "Newly reprocessed images from NASA’s STEREO-A spacecraft, allow scientists to trace the anatomy of a Coronal Mass Ejection in December 2008 as it moves and changes on its journey from the Sun to the Earth. Using a new technique, heliophysicists can now identify the origin and structure of the material that impacted Earth, and connect the image data directly with measurements at Earth at the time of impact."

A second NASA-produced video contained in, "Enhanced Technique for Tracking Solar Storms All the Way From Sun to Earth," reveals, "STEREO has been able to track solar storms in their entirety before, but a new 'data mining' technique allows for greater detail to be extracted". Please take in both videos as our local weather doesn't end with space!