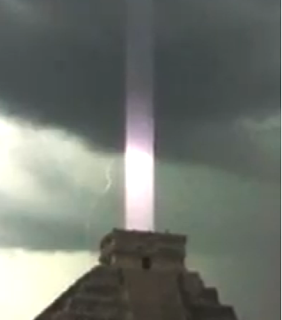 In 2009, Hector Siliezar stirred controversy with an innocent tourist visit to Chichen Itza, taking shots of his family with digital camera in front of the historic pyramid. It was only later, when examining the pictures, that Siliezar discovered an image of a light beam, described as emanating up to the heavens! Jaime Maussan, ufologist, made hay with the picture on Mexican TV in a documentary. Another YouTube video makes the case to debunk it as likely hoax since no light source can be seen at the top through the entrance. It seems a fair argument and counter to energy and light believed required for column of light. We revisit the mystery of Chichen Itza as it will likely take center stage towards end of the year with the end of the Mayan calendar on December 21, 2012. There's more to Chichen Itza than just stone - as a video with English subtitles informs us of the "Equinox at Chichen Itza.". You can even sign up for Maya2012 if you want to be there!