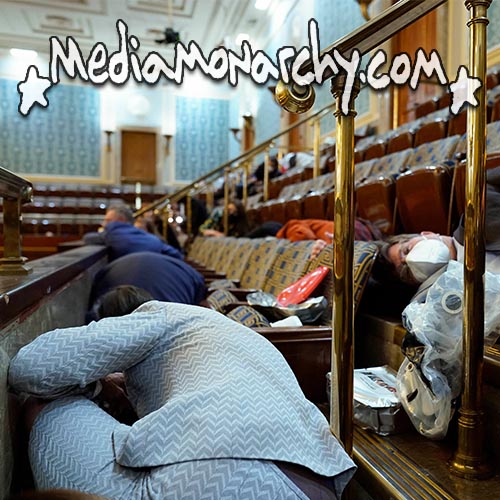 The expendables, capitol offenses and power plays + this day in history w/the designated hitter and our truth music of the day by Brudini on your #MorningMonarchy for January 11, 2021.

Ahhhh, the bittersweet plight of your friendly neighborhood conspiracy theorist, summed up in one bro bro text reply
https://twitter.com/mediamonarchy/status/1347738081563066368

Arnold @Schwarzenegger: My message to my fellow Americans and friends around the world following this week's attack on the Capitol. (Audio)
https://www.youtube.com/watch?v=K3EZ2tVZ5MY

People who overthrow countries for a living were scared for a minute.
https://twitter.com/mediamonarchy/status/1348323101893824514

US Capitol Attack a Reminder of the Perils of Using Violence in the Name of Fighting Injustice
https://bit.ly/3bstWRU

Attack On The Capitol - Just another attack on your rights - WhatsHerFace. (Audio)
https://youtu.be/yEkRIJOQW0g

The Government’s New ‘War on Terror’ is Coming — This Time It’s Aimed at America
https://bit.ly/3bqzWKM

Biden has often bragged about being the architect of the Patriot Act. He'd written the original text years earlier for a bill that was rejected due to civil rights concerns, then 9/11 happened and they rolled it out with astonishing speed. // Biden is calling for new harsh legislation against "domestic terrorism" and this is exactly how the state will weaponize the events of 1/6 against anarchists, leftists, BLM, and Indigenous peoples.
https://twitter.com/caitoz/status/1347653180713156609

After backlash to NY Bill A416, which allows the gov to detain individuals deemed dangerous during a public health emergency, sponsor @NNickPerry tells me there was "no intent" to "violate any rights, or liberties that all Americans are entitled to under our constitution"
https://twitter.com/eviefordham/status/1345806623663648768

Yet another Israeli atrocity in occupied territory ups pressure on Dems and liberal Zionists to condition US aid
https://bit.ly/3bgRoBA