from threat level: A 19-year-old Florida teen's suicide broadcast Wednesday on Justin.tv was a result of an overdose of opiates and benzodiazepine, the Broward County Medical Examiner & Trauma Services Division said Friday. The Pembroke Pines teen was pronounced dead about 6 p.m. on Wednesday, coroner spokeswoman Sherri Baker said in a telephone interview. She said benzodiazepine is used for depression and insomnia. About 185 people were viewing the feed on the San Francisco-based live-streaming service. The teen had announced his pending suicide on a bodybuilding.com chat forum, which linked to the broadcast. He left an online suicide note. Viewers were seen egging him on. The chat's moderator called the authorities, Baker said, and police broke into the residence. Justin.tv CEO Michael Seibel said in an e-mail: "We regret that this has occurred and respect the privacy of the broadcaster and his family during this time. We have policies in place to discourage the distribution of distressing content, and our community monitors the site accordingly. This content was flagged by our community, reviewed, and removed according to our terms of service."

argentine man kills himself on tv 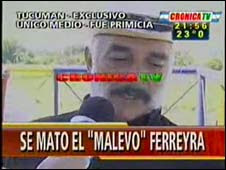 from bbc: A former police chief in Argentina, wanted for alleged crimes against human rights, has shot himself dead in front of television cameras. Mario Ferreyra was giving an interview on top of a water tank at his home in the northern province of Tucuman. Police were coming to arrest him when he killed himself. Mr Ferreyra was wearing his customary black shirt and cowboy hat and told the interviewer that he was innocent and had not committed any crimes. He then told his wife, Maria, that he would love her forever, pulled a pistol from his boot and shot himself behind the ear. 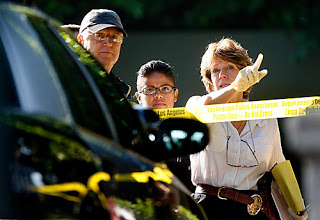 from wikinews: An unidentified man, carrying two swords, has been shot and killed outside the Church of Scientology Celebrity Centre in Hollywood, California. The incident occurred around noon on Sunday. According to reports, a security guard working at the building shot and killed the man after he allegedly approached the officer with swords in both hands. He arrived to the Church in a red convertible and approached the guard in the center's parking lot. After the guard told the man to leave, he began to run at the guard with the sword. At least three guards are reported to have been present at the time of the shooting, but it is not known how many fired shots. April Harding, a Los Angeles police spokesman, said that the guard "felt threatened" and fired the gun at the man. The man was taken to a local hospital, where he died of his injuries. Police are investigating the incident, and have closed off the building. Harding says the guard has been detained while authorities investigate the incident. Harding believes the shooting was done in self defense.

update: man shot by scientology guard was from oregon
from ap: An Oregon man who was fatally shot as he wielded a pair of samurai swords and attempted to attack guests at a landmark Scientology building was a former follower of the religion who had made at least a dozen previous threats against the church, a Scientology official said Monday. Mario Majorski, 48, of Florence, Ore. was shot once by a security guard as he tried to use the swords to attack guests Sunday at the Scientology Celebrity Centre in Hollywood, police said.

mukasey collapses, unfortunately regains consciousness
from m&c: Attorney General Michael Mukasey collapsed while delivering a speech to the Federalist Society in Washington, reports CNN. Mr. Mukasey collapsed Thursday night while giving a speech to the Federalist Society in Washington, according to three senior administration officials. The details about Mukasey's condition are not known as of yet. Mukasey is a former federal prosecutor from New York City who succeeded former Attorney General Alberto Gonzales. CNN said Mukasey, 67, was rushed to George Washington University Medical Center in Washington.