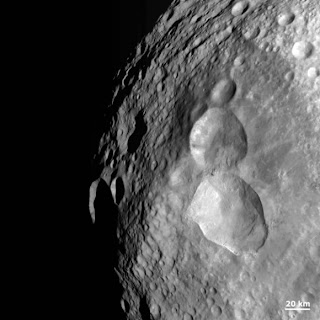 4 Vesta appears to be only a rock to most of us, it's still an appreciable body not far in relative terms.  Vesta orbits at a distance of 156, 000,000 miles from Earth in asteroid belt between Mars and Jupiter. Dawn spacecraft orbited Vesta for a year to learn more about our solar system.   Five new discoveries are reported, as a result, in recent Universe Today article.  It was over 200 years ago, "when Heinrich Wilhelm Olbers first glimpsed Vesta on March 29, 1807 — this date in history — the asteroid was but a small point of light. Asteroid science was very, very new at the time as the first asteroid (Ceres) had been discovered only six years before," begins article.  The five surprising observations made about the heavenly body:  1) Vesta dirt is "well-mixed and mobile," lending smooth appearance to surface, 2) stretch marks apparent around asteroid's equator, may be due to a large impact, causing layers to separate inside asteroid and surface expansion, 3) "'Vesta is a transitional body between a small asteroid and a planet and
is unique in many ways,' said mission scientist Vishnu Reddy of the Max
Planck Institute for Solar System Research in Katlenburg-Lindau,
Germany. 'We do not know why Vesta is so special,'"  4) hydrogen discovered near equator possibly delivered to asteroid by impacts with meteors or comets, and 5) northern and southern hemispheres look completely different. "'The northern hemisphere is older and heavily cratered in contrast to the brighter southern hemisphere where the texture is more smooth and there are lots of sets of grooves. There is a massive mountain at the South Pole. One of the more surprising aspects is the set of deep equatorial troughs,' said Carol Raymond, Dawn deputy principal investigator, of NASA’s Jet Propulsion Laboratory, Pasadena, Calif."