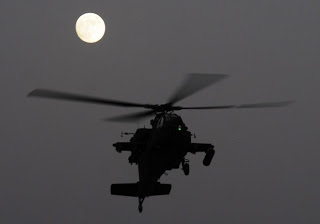 from danger room: U.S. officials don’t like calling what’s going on in Pakistan a war. But the US-led conflict, whatever name you give it, has never been this violent. The drone component of the campaign hit a new high over the weekend — 20 attacks in September alone, killing as many as 101 people. Today, NATO confirmed that a pair of its helicopters, based in Afghanistan, chased militant suspects across the border. 53 more are now reported dead.

In the Beltway, it’s considered bad form to refer to the Pakistan “war.” The term is too loaded with geopolitical baggage, and raises too many questions about who should be overseeing the conflict at home. But when NATO helicopters kill more than four dozen in Pakistan in a single day; when the CIA-led drone campaign hits 20 targets in 23 days (Link update; http://ammo.com/articles/armed-drones-obamas-weapon-of-choice-infographic); when thousands of U.S.-trained Afghans cross the border to fight insurgents on Pakistani soil; when American troops ferry aid to Pakistan’s flood victims; when the U.S. Air Force flies surveillance sorties over Pakistan; when American security contractors operate on Pakistani turf; and when U.S. Special Operations forces school Islamabad’s army in counterinsurgency (and sometimes lose troops to firefights in the process), what else should we name this multi-pronged military campaign? What other term would possibly apply?