70th anniversary of ‘war of the worlds’ psyop; sequel soon?

october 30, 2008 is the 70th anniversary of the legendary radio broadcast by orson welles. as a long-time radio & welles fan, i've always been fascinated by the wotw psyop. and now, as we're on the edge of another new world war/order, my suspicion is that we are ripe for another amazing psyop... but the question is: with all the tech/media that is now available, are we more or less likely to fall for it all again?

here is the entire 'war of the worlds' broadcast...

from marketwatch: [Oct30] marks the 70th Anniversary of "War of the Worlds," the groundbreaking radio broadcast that terrified millions of Americans who thought that the fictional audio play was real and Martians were actually landing in Grover's Mill, New Jersey. The original hour-long broadcast, which aired on the eve of Halloween, October 30, 1938, was part of CBS's Mercury Theatre On the Air, directed and narrated by Orson Welles, adapted from the H.G. Wells' novel The War of the Worlds, with the audio play written by Howard Koch (writer of Casablanca). It simulated a live news report of a Martian invasion with a series of realistic newscasts seeming to interrupt regularly scheduled programming... The broadcast is said to have been heard by over 6 million people that night. According to historians, various factors contributed to the widespread reaction: Tensions were running high leading to World War II, the convincing natural delivery of the cast, long stretches of commercial free airplay and only three disclaimers during the broadcast clarifying its fictional nature. As a result, the show ignited a reaction of fear and confusion among listeners across the country. News reports cited people fleeing their homes, and police lines flooded with listeners trying to determine the validity of the Martian invasion. The broadcast, considered one of the great moments in media history, continues to live-on through re-airings, live re-enactments and adaptations all over the world, introducing a new generation to the power of radio.

bill cooper on the 60th anniverary of the wotw psyop 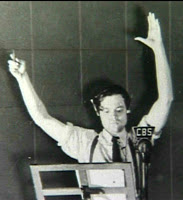 from hour of the time: The plan to create an artificial extraterrestrial threat to the Earth was first mentioned by the Marxist, John Dewey: "Some one remarked that the best way to unite all the nations on this globe would be an attack from some other planet. In the face of such an alien enemy, people would respond with a sense of their unity of interest and purpose." John Dewey, New York 1917.

The premise was tested for credibility with the CBS presentation of The War Of The Worlds by Orson Welles and the Mercury Theatre on October 30, 1938. At 8:00 PM Eastern Standard Time, on the evening of October 30, 1938, the night before All Saints Day, now generally celebrated as Halloween, an estimated six million Americans listened to the famous Orson Welles broadcast, War Of The Worlds. The broadcast described an extraterrestrial invasion from Mars. An estimated one million sheople responded with sustained credulity and fear. Thousands responded with sheer panic.

The broadcast was a psychological warfare experiment conducted by The Princeton Radio Project. The Rockefeller Foundation funded the project in the fall of 1937. An Office of Radio Research was set up with Paul F. Lazarsfeld as director, and Frank Stanton and Hadley Cantril as associate directors. Cantril used a special grant from the General Education Board to study the effects of the broadcast. Cantril published the study as a book titled The Invasion From Mars: A Study In The Psychology Of Panic. It contains a complete script of the broadcast. The book is one of a series of studies sponsored by the Federal Radio Education Committee.

War Of The Worlds, was broadcast by Mercury Theater on the Air, from a microphone in a New York studio of the Columbia Broadcasting System. Council on Foreign Relations member Frank Stanton was a CBS executive. Stanton would direct Radio Free Europe. Regarding the programs realism Cantril writes, "The sheer dramatic excellence of the broadcast must not be overlooked. The unusual realism of the performance may be attributed to the fact that the early parts of the broadcast fell within the existing standards of judgment of the listeners"...

The public believed the War Of The Worlds was real thus setting the stage for the implementation of an alien threat scenario... the only problem was that the state of the art of technology at that time did not allow for a believable presentation. The development of saucer shaped wingless and tailless flying machines by the Germans during WW-II solved the problem.

"In our obsession with antagonisms of the moment, we often forget how much unites all the members of humanity. Perhaps we need some outside, universal threat to make us realize this common bond. I occasionally think how quickly our differences would vanish if we were facing an alien threat from outside this world." - President Ronald Reagan, in a speech made to the 42nd General Assembly of the United Nations, Sept. 21, 1987

and finally, is this the way a new wotw-style psyop could go down...?
project bluebeam: a holographic rapture & the prophet hologram