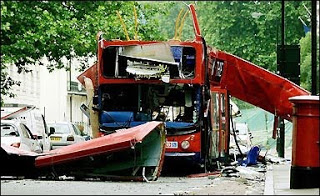 from emtyhell: Yesterday, the Queen visited ground zero and addressed the UN for the first time since 1957. Is it possible for a reigning monarch to commit treason? Coz some would argue that just by associating with the globalist crooks, she is. Today, I guess she's returning to the UK to hold another garden party or something like she did last year on 7/7.

Considering the media hype surrounding the fifth anniversary of 9/11, the fifth anniversary of 7/7 doesn't seem to have attracted much attention... I guess the reason they are not giving it much attention is because they don't want people to look into it. It is after all one of the the most suspicious terror attacks in recent history. Unfortunately however, much to the frustration of 7/7 researchers, there isn't really enough evidence to prove anything. Unlike say 9/11, which has been scientifically proven to be a fraud, or Flight 253, which was expertly exposed as a false flag by Kurt Haskell. But there are numerous coincidences, anomalies and unanswered questions that, when put into context, point towards government involvement.

9/11 updates:
'like a war zone': some nyc residents living behind barricades, checkpoints 9 years after 9/11*
rethink 9/11: a letter to peace activists*
restrepo, war & the washington post: reflections of a vociferous conspiracy theorist*