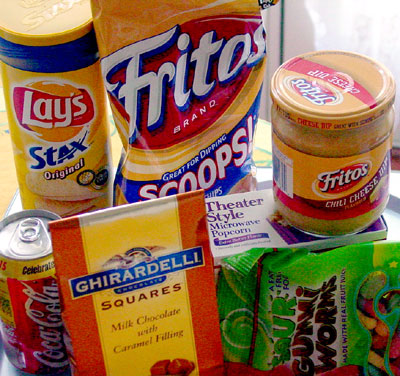 from babble.com: If you or your kids enjoy pre-packaged convenience foods commonly found in grocery stores across the U.S. such as Froot Loops, Swanson dinners, Mountain Dew, and frozen potato and bread products, you may think twice before purchasing them after hearing what they contain: dangerous chemicals that other countries around the globe have deemed toxic to the point that they're illegal, and companies are fined hundreds of thousands of dollars for including them in food products.


In a new book Rich Food, Poor Food, authors
Mira and Jason Calton provide a list of what they term "Banned Bad
Boys" - ingredients commonly used in up to 80% of all American convenience food that have been banned by other countries, with information about which countries banned each substance and why.

And though it might not surprise you to hear that Olestra - commonly
used in low/no-fat snack foods and known to cause serious
gastrointestinal issues for those who consume it (understatement) - is
on that list, having been banned in both the United Kingdom and Canada,
you may be shocked to hear that Mountain Dew, Fresca and Squirt all
contain brominated vegetable oil, a substance that has been banned in
more than 100 countries "because it has been linked to basically every
form of thyroid disease - from cancer to autoimmune diseases - known to
man."

You might also be upset to hear that the food coloring used to make your
kid’s delicious Mac & Cheese dinner visually appealing – yellow #5
and yellow #6, namely – is made from coal tar, which among other things
is an active ingredient in lice shampoo and has been linked to
allergies, ADHD, and cancer in animals

Then there’s azodicarbonamide – commonly found in frozen
dinners and frozen potato and bread products – which is used make things
like bleach and foamed plastics like those found in yoga mats (tasty!).
Azodicarbonamide has been banned in most European countries because
it’s known to induce asthma, and is in fact deemed so dangerous that in
Singapore its use carries a hefty $500,00 fine and up to 15 years in
prison.

Yet, according to the FDA, it’s SO TOTALLY FINE for us to keep
shoveling it into our kid’s faceholes: “[Azodicarbonamide] is approved
to be a bleaching agent in cereal flour and is permitted for direct
addition to food for human consumption.”

Finally, there’s butylated hydroxyanisole (BHA) and butylated hydroxytoluene (BHT) – found in Post, Kelloggs and Quaker brand cereals –
which is made from petroleum and is a known cancer-causing agent. It’s
been banned in England and Japan, but those of us in the U.S. can keep
right on serving up to our children for breakfast, because AMMURICA. And
FREEDOMZ.

Anyone else find all of this, ohhhh I don’t know, more than a tad bit
disturbing? I’m not ashamed to say I have love for the blue box Mac
& Cheese, and to think that chemicals known and recognized
world-wide as completely toxic are included in that – a product openly
marketed as being a meal FOR KIDS – makes me more than a little ragey. I
mean, those chemicals can’t be what makes it taste so good, right? So
can’t we, umm, just use something else instead?