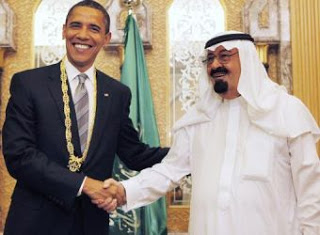 from steve watson: The Obama administration has effectively ended the efforts of families of victims of the September 11th attacks to bring lawsuits against members of the Saudi Royal family for financial links to the conspiracy. The Supreme Court today ruled that it will not allow any lawsuits to go ahead, just a few weeks after the government filed a court brief asking that the case be quashed. The court, in an order Monday, is leaving in place the ruling of a federal appeals court that the country and the princes are protected by sovereign immunity, which generally means that foreign countries can’t be sued in American courts, reports the Associated Press. In late May, the Justice Department had sided in court with the Saudi monarchy in seeking to halt further legal action to hold it liable for the attacks. The move came less than a week before Obama was scheduled to meet Saudi King Abdullah as part of his “rebuilding” trip to the Middle East. More than 6000 family members denounced the move as an “apparent effort to appease a sometime ally” in a public statement. The lawsuits claimed that Saudi Arabia and four of its princes actively aided in financing the plot through front groups posing as charities. Last week, the New York Times ran a report highlighting how documents uncovered by lawyers for the 9/11 families “provide new evidence of extensive financial support for Al Qaeda and other extremist groups by members of the Saudi royal family.” 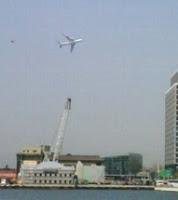 from raw story: Those who were shocked to discover, after 9/11, how easy it is for persons linked to terrorism to acquire pilots' licenses may be surprised to discover that, nearly eight years after that fateful day, at least six people known to have - or suspected of - terrorist links were able to keep their aviation licenses. Among them, says a story in the New York Times, was a Libyan national convicted for his role in the 1988 bombing of Pan Am flight 103 over Lockerbie, Scotland. The Times story, released late Thursday and largely overlooked by the rest of the media, says the Transportation Security Administration and Federal Aviation Administration didn't remove the individuals' aviation licenses until after the Times had inquired about the issue. Evidently, the TSA and FAA didn't know that these people were licensed pilots until a small New York state-based company called Safe Banking Systems uncovered the names while testing out a software application designed to search for suspected terrorists among bank records. 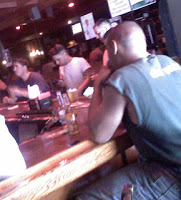 from nypost: Hard-drinking hard hats at the World Trade Center site have turned their lunch hour into happy hour, pounding beers and shots of hard liquor before returning to work, a Post investigation found. Dozens of workers belly up to the bar at gin mills on Murray Street - two blocks from the sacred soil of Ground Zero and America's most scrutinized construction project - shortly before noon every day. One group of three workers threw back eight drinks each in less than an hour before returning to the job.

former head of cia bin laden unit wants him to nuke us!
from washington's blog: Everyone is appropriately outraged that the former head of the CIA unit which hunted Bin Laden for almost a decade - Michael Scheuer - told Glenn Beck:

But people aren't putting this in context. In fact, many Neocons have also stated a desperate yearning for another attack on America (and see this). But there is another story here as well.

In other words - as demonstrated above - the U.S. did not really try to capture Bin Laden.

And remember that the Congressional Joint Inquiry into 9/11 discovered that an FBI informant had hosted and rented a room to two hijackers in 2000 and that, when the Inquiry sought to interview the informant, the FBI refused outright, and then hid him in an unknown location, and that a high-level FBI official stated these blocking maneuvers were undertaken under orders from the White House (confirmed here by the Co-Chair of the Joint Inquiry and former Head of the Senate Intelligence Committee, Bob Graham; and see this Newsweek article).

And that a key Al Qaeda trainer actually worked with the Green Berets and the CIA and was an FBI informant.

And that the CIA may have helped most of the 9/11 hijackers get their visas to the U.S.

And that CIA agents allegedly met with Bin Laden two months before 9/11, when he was already supposedly wanted for the bombing of the U.S.S. Cole, and when it was obvious to the intelligence services that he was supposedly planning 9/11.

Given that the government shielded top Al Qaeda members, and give that one of the top guys responsible for capturing Bin Laden now wishes OBL would attack America using weapons of mass destruction, the question must be asked whether people within the U.S. government wanted Bin Laden to attack the U.S. prior to 9/11.

This is an especially interesting question since a delay of a couple of minutes would have allowed the 9/11 attacks to succeed.