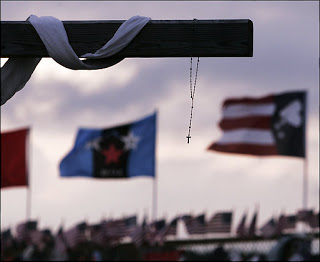 olbermann: white house owes apology to 9/11 victims for 'lie'
from raw replay: White House spokesperson Tony Fratto told Fox News that the events of 9/11 were unforeseeable and not President Bush’s responsibility. Countdown’s Keith Olbermann points out the numerous times the White House was briefed on suspicious activity and chose to do nothing about it. This video is from MSNBC’s Countdown, broadcast Dec. 18, 2008.

'the nation' magazine survey: tell them to cover 9/11!

additions to the 9/11 timeline as of dec22: day of 9/11 & united 23
from history commons: Most of this week’s new entries in the 9/11 Timeline again deal with the day of 9/11, shortly before which NORAD was preparing a major war game. On the day itself, the Northeast Air Defense Sector (NEADS) called an air defence unit in Atlantic City, just before the first plane hit the World Trade Center, but the phone was not answered. FAA manager Ben Sliney began responding to the crisis around the same time and the air space over New York was closed after the second plane hit. There are also new entries about another phone call from Flight 93, by passenger Andrew Garcia, a suspected hijack in the afternoon that delayed travel by President George Bush, and the lobby of World Trade Center 7, which was ruined by midday.

Another additional entry covers United 23, which was thought to be a potential hijack target on 9/11. The alleged potential hijackers were arrested when they returned to the airport a few days after the attacks, but soon released. Finally, the air force also started using a better radar system in Washington the day after the attacks and the governor of Kentucky was nearly shot down over Washington in 2004.

Originally posted here. If you can spare a dollar or two, please remember that every donation helps.

There have also been some interesting additions to one of the other projects hosted by the History Commons, Neoconservative Influence.

from washington post: It has been more than seven years since 20-year-old Deora Bodley and 39 other passengers and crew died in the fiery crash of United Airlines Flight 93, their hijacked plane disintegrating in a grove of hemlock trees outside Shanksville, Pa. Most of the remains from the tragedy on Sept. 11, 2001, were never recovered, making the bowl-shaped crash site in the western Pennsylvania countryside an unofficial cemetery and, for surviving relatives, sacred ground. But efforts to buy property for a national Flight 93 memorial have bogged down in federal red tape and a protracted land dispute, angering family members and risking plans to hold a dedication ceremony on the 10th anniversary of the Sept. 11 attacks. The delays have prompted an advocacy group, Families of Flight 93, to ask President Bush to personally intervene during his final weeks in office to allow the federal government to seize the land needed for the memorial and to allocate part of the money for the project. "He signed the memorial act. He wanted something to be there and to be in place for years and years to come," said Bodley's mother, Deborah Borza, of San Diego. "We have waited so long already. I hold on to being hopeful that between now and January 20, something will happen, something will break free." Landowner Mike Svonavec of Svonavec Inc. of Somerset, Pa., said the National Park Service and Flight 93 groups are "trying to make my company and myself look like the bad guy in this."

conservative prof: 'saddest part' of 9/11 attacks was impact on bush
from raw story: "For me, the saddest part about the terrorist attacks of 9/11 is the long-term impact on the presidency of George W. Bush," wrote Tony Campbell, an adjunct professor of political science with Maryland-based Towson University, on The Moderate Voice Monday. Nevermind the 3,000+ Americans who died on Sept. 11, 2001. Or the resulting wars. Or that one of the countries Bush chose to invade had nothing to do with the attacks. Or even the lingering, unanswered questions as to just how exactly the 9/11 attacks were pulled off.