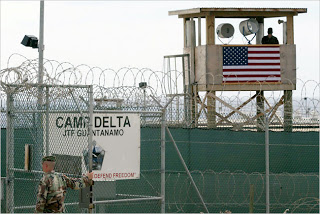 the real reason only 5 detainees are coming to new york?

from history commons: US Attorney General Eric Holder recently announced that five detainees would be moved from Guantanamo Bay to New York, where they would stand trial for carrying out the 9/11 attacks. However, five other detainees will continue to be tried before military commissions, which have lower standards of evidence. The five detainees coming to New York have previously indicated they intend to plead guilty, although the five to be tried before military commissions have not.

According to this McClatchy article, the five Holder says will be tried before military commissions are: Ibrahim al Qosi, who is trying to have incriminating statements he says were made under torture/coercion suppressed and wants to go home to Sudan; Omar Khadr, who is fighting the charges against him. His lawyers claim most of the evidence against him is based on statements he made under coercion; Ahmed al Darbi, who says he was tortured into confessing; Noor Uthman Mohammed, who denied many of the charges against him; and Abd al-Rahim al-Nashiri, who says he’s innocent and was also tortured into confessing.

As I pointed out earlier today, there is a lot of evidence against al-Nashiri. However, based on what I know of the Khadr case, he would stand a very good chance of acquittal, unless the bar was lowered from beyond reasonable doubt to “I guess he might have done it.” The other three to be tried before military commissions I don’t know much about.

Is it just a coincidence that the five detainees who have indicated they intend to plead guilty are going to New York, but the ones that are fighting the charges are getting military commissions?