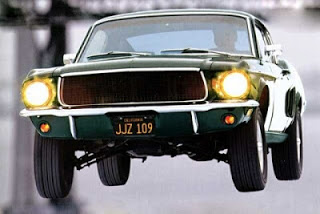 A ”68” MUSTANG ON THE NEUROLOGICAL HIGHWAYS OF A TRANSHUMANIST ARMAGEDDON

Paul McGuire takes writing of Bible prophecy to another level in recent article, "A ”68” MUSTANG ON THE NEUROLOGICAL HIGHWAYS OF A TRANS- HUMANIST ARMAGEDDON."  McGuire writes article in his current hyperbolic style, and often, seems difficult to accept?  It is as if reader suffers same neurological overload, the writer describes as main propaganda tool of Luciferian elite.  The present writer finds each theme plausible, but in toto, the whole becomes fantastic and beyond belief!  Readers will need a 1968 Mustang with a V8 390 to outrun traffic congestion of sensory overload on their neurological highways just as prescribed by McGuire. Yet, the final verdict falls in the writer's favor.  McGuire describes modern mentality, possibly, better than anyone else to date:

"The average American cannot process the present, nor can they predict the future. They are in a state of sensory overload with their left brains overwhelmed by a continuous data stream of useless information. With few exceptions they are unable to access their right brains and so they are not in their right mind. This is all planned by the Luciferian elite, also known as the Illuminati, whose motto is 'Order out of Chaos'.”

McGuire's diagnosis becomes little less than a hemispheric lobotomy as access to the right brain gets cut off!  A preoccupation of the left brain in processing a constant stream of useless information, explains the mechanism. The right brain, is simply shut down, because of constant streaming of sensory input with left brain tasks!

The tools of the trade used by the Luciferian elite AKA Illuminati are described by McGuire, who also warns of the implications below:

"The elites use trauma based conditioning and endless images of horror, brutality, and porn, along with the Luciferian inversion of values and the meanings of words. Ancient covenants like marriage and the family have been turned upside down. The ancient wisdom of the gods of Babylon has been passed on the Rosicrucians to the Illuminati and it is being used to manufacture the chaos. This New World Order which the brainwashed masses and the Hollywood celebrities will run to for their salvation is a 'New Aeon.' The problem is that people do not know what that means. The New World Order is the same New World Order Adolph Hitler tried to create, built upon the premise that there is a genetically superior master race of god men or supermen who will rule the world through force. Everyone else will be their slaves."

The case made by McGuire boils down to the masses will beg for relief from a life on sensory overload!  The solution offered people will be little more than a bill of goods just one more in a long line.  McGuire explains our dilemma resides on the back of every dollar bill, a symbolism to cement in your subconscious you're a slave:

The ruling god-men elite come with tragic transhumanist twist in the writer's view to fulfill prophecy. It's not superior genes mixed with the human genome to perfect mankind, rather it's a demonic deception to mix Nephilim DNA as described by McGuire below:

"We are now in a time period before the predicted Tribulation Period in the Book of Revelation. When Lucifer led a revolution against God with one third of the angels it was because he wanted to be God. When the serpent tempted Adam and Eve he promised them that 'ye shall be as gods.' The science of Transhumanism is now being used to create a new race of god men who will rule the earth. But there is a secret ingredient in the new DNA, for the DNA of fallen angels is being combined with that of human women, as in the case of the Nephilim, like Nimrod, although some believe that the DNA from aliens is being used to create a super race."

McGuire implores readers to take on task of understanding coded messages all around us. It's fantastic argument but supported by Bible prophecy:

"But understanding this part of the code is essential for understanding the New World Order. Nimrod was a Nephilim and a type of Satan. Babylon comes to life again as a whore in the Book of Revelation. The phallic symbol monuments [Washington Monument] and the dome monuments [the Capitol building] are a reminder that there must be a supernatural impregna- tion. The seed of sperm from the fallen angels will impregnate human women once again. The New World Order is predicted in the Book of Revelation along with the one world government, one world economic system, and one world religion. The head of this world system is Lucifer, who rules through the Antichrist. The world falls under total scientific mind control and occult power through the False Prophet.

At a specific trigger point the true God will return with the armies of Heaven and begin the War of Armageddon against the Luciferian forces. This war will be a multidimensional conflict and involve interdimensional beings."

The interdimensional beings will likely be angels. McGuire believes for most ordinary men when confronted by Bible prophecy, "...it overloads their neurological highways and produces cognitive dissonance because it is information that is outside the box of their programming." The present writer agrees and feels need for an engine overhaul!