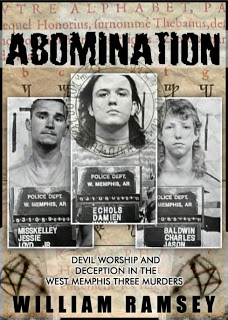 William Ramsey believes 1994 convictions of Damian Echols, Jesse Misskelley Jr. and Jason Baldwin, proper.  The West Memphis Three (WM3) , as they're collectively known, were convicted for the 1993 brutal beating, sexual abuse, mutilation and murder of three young boys.  The WM3 later released from prison in 2011, due in no small part from support of celebrities, such as Johnny Depp.  Ramsey senses propaganda in attempt to rehabilitate image of guilty figures in well-known FBI profiler John Douglas' book, "Law & Disorder: The Relentless FBI Profiler's Relentless Pursuit of Justice."  "Douglas fails to acknowledge the reality of satanically motivated crime, and his involvement contributed to a miscarriage of justice represented by the
release of these murderers.  How much was John Douglas paid for his involvement in the case from the $10 to 20 million dollar Hollywood
defense fund?" Readers should ask why this case became a cause celebre in Hollywood?  The present writer senses similarities to False Memory Syndrome Foundation (FMSF), a support network for parents accused of child abuse by their children.  FMSF name associated, in the eighties, with high profile child abuse cases such as the McMartin case.  Ramsay seems to have turned to research to clear the air, suspects occult signatures in 9/11 tragedy, and believes, satanic involvement in the WM3 case.   The author goes further to declare release of WM3 perps represents fraud of most egregious order.  Wow!  The Truth About the West Memphis 3 is a source website.

You can hear more on what Ramsey believes about WM3 case in fascinating interview at Off Planet Radio.  It's must listen stuff!  "Paradise Lost:  The Child Murders at Robin Hood Hills ," a documentary on WM3, is available below.