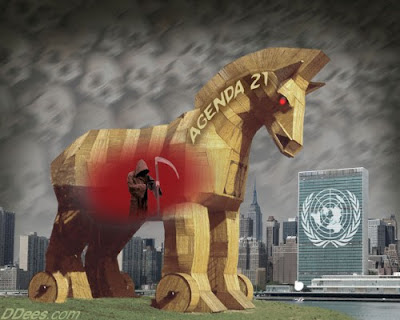 from nytimes: Across the country, activists with ties to the Tea Party are railing against all sorts of local and state efforts to control sprawl and conserve energy. They brand government action for things like expanding public transportation routes and preserving open space as part of a United Nations-led conspiracy to deny property rights and herd citizens toward cities... The protests date to 1992 when the United Nations passed a sweeping, but nonbinding, 100-plus-page resolution called Agenda 21 that was designed to encourage nations to use fewer resources and conserve open land by steering development to already dense areas. They have gained momentum in the past two years because of the emergence of the Tea Party movement, harnessing its suspicion about government power and belief that man-made global warming is a hoax.