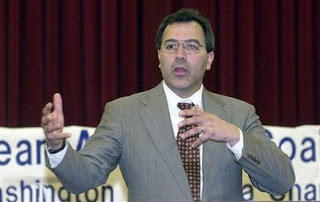 air farce one stunt: a resignation & a photo

from dpa: A White House official resigned Friday [may8] after allowing a presidential plane to fly low over New York, causing widespread panic last month that a terrorist attack was underway. Louis Caldera, director of the White House Military Office, apologized last month after setting up a government photo shoot that for many New Yorkers brought back images of the September 11, 2001, terrorist attacks. 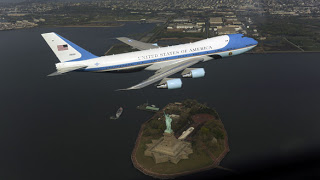 The Boeing 747, accompanied by an F16 fighter jet carrying camera equipment, descended on New York's skyline on April 27 in order to take a photograph above the Statue of Liberty. New York's public was not informed, and residents and office workers the city's downtown financial district, where the World Trade Center towers once stood, fled their skyscrapers into the streets as they saw the approaching jumbo jet, seemingly pursued by a military fighter. President Barack Obama ordered an investigation into the blunder. The White House released the photograph taken during the flyover along with Caldera's resignation letter. Caldera said the scandal "has made it impossible for me to effectively lead the White House Military Office." The White House said that Obama accepted the resignation.

update: faa denies navy’s nyc flyover request
from ap: The Federal Aviation Administration said it turned down a U.S. Navy request to fly a patrol aircraft past Manhattan on Monday, two weeks after a government photo shoot caused a brief panic near ground zero. A Navy unit from Brunswick, Maine, wanted to fly a P-3 Orion reconnaissance plane up and down the Hudson at about 3,000 feet, well above New York's tallest skyscrapers, at around 10:30 a.m., the FAA said. After city officials were informed and higher-level FAA officials learned about the request, they declined permission for the flight.