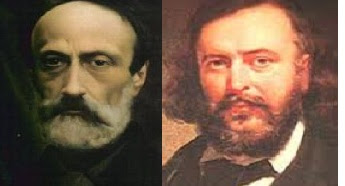 Does purported August 15, 1871 letter written by Albert PIke (picture, right) to Guiseppe Mazzini (picture, left) have implications for today's world? Forecasts & Prophecies provides following entry: "The Pike letter to Giuseppe Mazzini was on display in the British Museum Library in London until 1977, This letter has been claimed by many internet sites to reside in the British Library in London , which denies the letter exists. Giuseppe Mazzini was an Italian revolutionary leader of the mid 1800s as well as the Director of the Illuminati.  Albert Pike (historical Masonic figure) is a 33rd degree, Freemason Occultist Grans Master and creator of the Southern Jurisdiction of the Masonic Scottish Rite Order." Whether, the letter was a hoax, will remain, point of contention; however, its mythic standing makes its existence for all purposes - real. The letter seems too prescient to utterly lack any foundation in reality?  Dean Henderson adds a link in this long tradition of subterfuge to the present day with, "When The Rothschilds Dial 911."  In Henderson's view, September 11, 2001 appears little more than another crazy swerve down path human civilization follows under direction of bankster elite:

"On August 15, 1871 Sovereign Grand Commander of the Ancient & Accepted Scottish Rite of Freemasonry General Albert Pike, who later founded the Ku Klux Klan and prosecuted the Indian Wars, wrote a letter to Italian P-1 33rd Degree Grand Commander and Mafia founder Guiseppe Mazzini. In the letter Pike talked of a Brotherhood plan for three World Wars. The first, he said, would destroy czarist Russia and create a Communist “bogeyman” which the bankers could employ to justify their foreign interventions around the world. The second, Pike said, would be used to create Israel, which would become a mercenary force for the international bankers, protecting Middle Eastern oil interests for Rothschild and Rockefeller combines.

The Third World War, stated Pike’s letter, would pit Arabs against Zionists, and would culminate in a New World Order completely controlled by the international bankers and their secret societies. Pike described the events that would unfold as pretext for WWIII, 'We must provoke a social cataclysm which in all its horror…everywhere the citizens obliged to defend themselves against the world minority of revolutionaries…will receive the true light through the pure doctrine of Lucifer, brought finally out into public view.'

In June 2001, a female Russian doctor stated in a Pravda column that the US would be subject to a massive terrorist attack in late August 2001. She was then asked what she believed was coming next. She suggested selling dollars and buying Russian rubles, saying that the secret group behind 911 was the most powerful force in the world, worth over $300 trillion. She said this group would soon “strike America in the back” while it was down and that the next shoe to drop would be the decimation of the US economy. This 'secret group'  could only be the Illuminati Rothschild-led Eight Families."