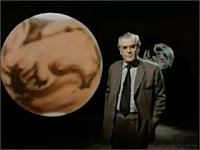 Is Alternative 3 just good sci-fi? The planning of options for a dying planet due to climate change, seem to ring true. Anomalies Network website, founded by Olav Phillips, in article, “The Most Dangerous TV Show Ever Made“, draws some interesting parallels between the last Science Report program broadcast in June 1977 and our recent past. The program was intended to air as an April Fool joke a grand finale for the discontinued program. Critics find, however, the addition of Tim Brinton as presenter, a well-known host, only added to the program’s apparent authenticity. The program has virtually disappeared with all masters destroyed in a fire, some time ago. The article finds puzzling how the production company allowed not only the destruction of the film but all contracts and legal documents, as syndication rights are a significant source of income?


The climate change premise, which only surfaced as a prominent issue decades later, is an eery correspondence to our current reality.  Edward Teller, nuclear scientist and father of the hydrogen bomb, is credited as the source for many of  these ideas. Teller warned about rising levels of carbon dioxide and greenhouse gases in a famous 1957 speech in front of American Chemical Society.  The article’s author believes this may have been the inspiration behind Operation Argus , one year later, to see if gases could be vented into space by blowing a hole in the upper atmosphere with a nuclear explosion, which is Alternative 1.

Teller also “surmised that global warming could be reduced or abated by jettisoning large amount of metallic debris into the upper atmosphere to reflect sun light and cool the surface of the earth. In looking into his theory, it became quickly obvious that chemtrails were the obvious result of high altitude dumping of material and could very well be the execution of that original plan.” It’s another stunning parallel made in the article that seems apparent and squarely blames the famous nuclear scientist.

Alternative 2 was proposed as an option to build networks of underground cities and tunnels for a select few to carry on the human race.  Site R and the Svalbard Seed Vault add validity and support that these ideas have been put into effect, according to the article.  The Old Greenbrier Bunker under the resort in White Sulphur Springs, West Virginia needs to be included as its completion in 1962, places it near the pinnacle of the Cold War Era.  The rumors of an underground rail into the Rocky Mountains underneath the Denver Airport, should be noted here.

Alternative 3 option planned on evacuating a cross section of the population to Mars via a way station on the back side of the Moon.  The final Science Report: “Alternative 3” contends the missing scientists in a brain drain of the United Kingdom were, in fact, apprehended for the purpose of the third alternative. The article points out the large number of children that go missing each year in the United States as a plausible resource. Nazi anti-gravity technology of Die Glocke or The Bell makes this option feasible in the author’s estimation.

2012 is the suspected date, when the usefulness of the alternatives, may become apparent to the rest of us. The author isn’t certain of the end game whether it’s climate change. a solar flare, or an asteroid?  The article is going on intuition and gut instinct, predicting apocalypse for 2012, citing the end of the Mayan Calendar and remote viewers’ reports of a hazy period around 2012. The present writer falls in the author’s camp, the oligarchs are planning for something and aren’t telling us!  You should watch Alternative 3 on You Tube while it’s still on the net!

One response to “alternative 3 revisited”