americans watched more television than ever in 2010

as america falls down, ‘tv viewing continues to edge up’ 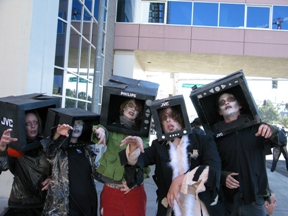 from nytimes: Historians may someday note with wonder that by the end of 2010, at least six cable television shows were about auctioneers and pawnbrokers. And all were considered successes by their respective channels. Countless shows were about cops and robbers, too, and countless hours were devoted to competitive singing, dancing and even figure skating, and they each found an audience, proving again that television remains a refuge in the media revolution. (Except, perhaps, for figure skating. In December, ABC’s “Skating With the Stars” struggled to keep a mere one million viewers ages 18 to 49.)

Americans watched more television than ever in 2010, according to the Nielsen Company. Total viewing of broadcast networks and basic cable channels rose about 1 percent for the year, to an average of 34 hours per person per week. The generation-long shift to cable from broadcast continued, but subtly, as the smallest of the big four broadcast networks, NBC, still retained more than twice as many viewers as the largest basic cable channel, USA. Cable hits like “Jersey Shore” on MTV and “The Walking Dead” on AMC were showered with media attention and affection, but the most popular new show was CBS’s “Hawaii Five-0,” a revival of a 40-year-old drama.

One response to “americans watched more television than ever in 2010”