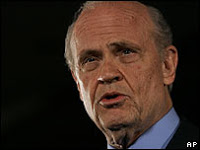 and then there were five: fred thompson drops out

from bbc: Former US Senator Fred Thompson has withdrawn from the Republican presidential race, after a string of poor finishes in early voting rounds.

"I have withdrawn my candidacy... I hope that my country and my party have benefited from our having made this effort," he said in a short statement.

It follows his third place result in Saturday's South Carolina primary - a state he had said he needed to win.

Mr Thompson did not say whether he would endorse any of his former rivals.