apocalypse theater: 7 signs of the apocalypse 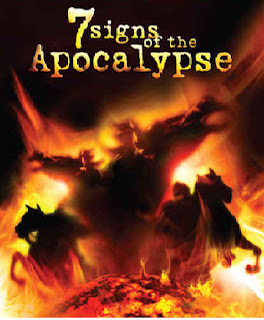 Why not get into an apocalyptic mood - after all, it's 2012? Paul McGuire, an author and producer, who lives in Los Angeles, shares aspects of his own spiritual journey in article, "Totalitarian State Mind Control Wars: Part I". "This war is not a new war; it is a mind control war that goes back to ancient Babylon and the secret occult religions. The primary military theatre of this war is in the human mind," begins McGuire, "...most people do not understand the Luciferian and spiritual dimension of this warfare that was planned centuries ago." The author see links in Marx and Engels "Communist Manifesto" and even America's public education movement of the early 20th century to subversive intent of ruling elite, whose "...endgame is a microchipped planet of slaves who will serve the Illuminati elite".

McGuire views H.G.Wells and Aldous Huxley as agents in the secret agenda. Wells' book, "The New World Order", reveals battle plan and according to McGuire, "Wells realized that scientific mind control is far more effective than troops, guns and camps".

The article becomes compelling, when McGuire shares his personal experience while in High School:

"...read Huxley’s book [Heaven and Hell and the Doors of Perception] and took mescaline not as a means to get “high,” but to travel through the doors of perception. At around this same time, Harvard Professor Timothy Leary was telling people to “tune in, turn on and drop out,” by ingesting an even-more powerful drug LSD. In my search for the answers to life’s questions, I began taking LSD, practicing Eastern mysticism, saw the great white light and communicating with spirit guides...My major at the University of Missouri was “Altered States of Consciousness” and filmmaking."

The ultimate revelation for McGuire is truly riveting, "back then I did not understand the promotion of psychedelic drugs and the counter culture was a mind control war called MK ULTRA". McGuire goes further by concluding he's now convinced, the "spirit guides" were demons!

McGuire lived in the Laurel Canyon area, and believes, caught a glimpse of compound at Lookout Mountain, a rumored secret government facility.  The writer had already left the counter culture by then and through his research, "...began to realize the occult-Illuminati connections between psychedelic drugs and the MK ULTRA program which was developed by Nazi scientists who were practicing Satanists brought to America after World War II. This implied that certain rituals and drugs can open portals into another dimension and allow demonic entities to travel into our present reality, which is the secret component of the mind control wars."

Wow! Paul McGuire is featured prominently in the History Channel's "7 Signs of the Apocalypse," a link to full movie on You Tube! McGuire makes clear his belief mind control is a means to an end in a spiritual war!