Arc of Venus: Mysteries of Our Sister Planet’s Atmosphere 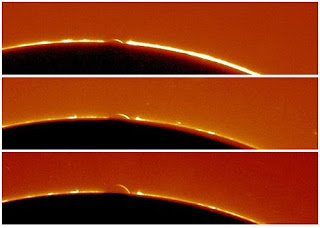 The Daily Galaxy shares scientists strategy to better understand atmosphere of Venus.  The biggest Venus mystery concerns, according to article, "...super-rotation. The whole atmosphere circles the planet in just four Earth days, much faster than the planet's spin period of 243 days."  Refracted sunlight as it passes through layers of air above planet's cloudtops, creates an arc of light.   "The brightness of the arc reveals the temperature and density structure of Venus's middle atmosphere, or 'mesosphere,' where the sunlight is refracted. According to some models, the mesosphere is key to the physics of super-rotation. By analyzing the lightcurve of the arc, researchers can figure out the temperature and density of this critical layer from pole to pole,"  reports article.  It's difficult to imagine world. where it revolves only once every 243 days but the weather circles the globe every four?  Will scientists figure out physics of  super-rotation of Venus atmosphere?