are worldwide food shortages being caused by investors’ speculation?

video update: grocery bills are on the rise 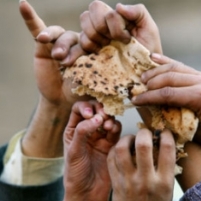 from allgov: World food prices have continued to rise over the past five years, creating the potential for malnutrition and starvation in the developing world, and fomenting political unrest in nations like Egypt. While some economists have blamed the price increases on growing food demand in China and India or diversion of crops to ethanol production, other experts say Wall Street is behind the problem, as commodity futures have become a fad investment ... like sub-prime mortgages not so long ago.

Prices began going up in 2006, and by the following year, wheat shot up 80%, corn (maize) by 90% and rice by 320%. The surge provoked food riots in more than 30 countries, where a combined 200 million people faced malnutrition and starvation. By spring of 2008, food prices declined back to their previous levels, without clear explanation. Then, prices went up again in 2010, by 25%.

Jean Ziegler, the United Nations’ Special Rapporteur on the Right to Food, has blamed “man-made actions” for the price fluctuations. Others have specifically pointed to Goldman Sachs and other investment firms.

Last decade, Goldman began buying up wheat futures, until the market experienced “demand shock,” and investors were able to set prices to their liking. For example, hard red wheat went from trading between $3 and $6 per sixty-pound bushel to $12, then $15, all the way up to $25 per bushel in 2008, a year in which the world produced more of the grain than ever before.

The price manipulations have now begun to affect industrial nations, with the United Kingdom and Europe experiencing food price jumps of 10% a year. Not surprisingly, European officials meeting in Berlin recently warned of threats to food security and the danger of riots in some parts of the world unless governments take action to regulate the trading of food commodities.