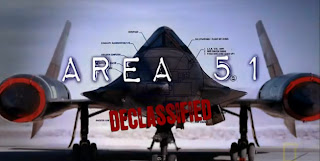 In 1955, Lockheed Skunkworks selected Groom Lake aka Area 51, the name provided by a grid map, as an ideal location for testing of u-2 high altitude spy plane as it came off the drawing boards. The dried lakebed made an ideal airstrip and its remote location surrounded by the Nevada Test Site, would help prevent spying. National Geographic provides a good overview in "Area 51 Declassified," of early days there, which can be appreciated by anyone old enough to realize how long the facility remained unknown.

"In only three months a 5,000-foot...runway was constructed and was serviceable by July 1955. The Ranch [Area 51] received its first U-2 delivery on 24 July 1955 from Burbank on a C-124 Globemaster II cargo plane, accompanied by Lockheed technicians on a Douglas DC-3 The first U-2 lifted off from Groom on 4 August 1955. A U-2 fleet under the control of the CIA began overflights of Soviet territory by mid-1956," according to Wikipedia.

In 1960, the A-12 designed to replace the U-2 also known by code name OXCART, required significant expansion to the facility. A longer airstrip and new hangars were built to accomodate the first stealth plane. "The first OXCART was covertly trucked to the base in February 1962, assembled, and it made its first flight 26 April 1962...The A-12 would remain at Groom Lake until 1968 and occasionally deployed to other United States bases overseas. The SR-71 Blackbird, by contrast, first flew at Palmdale, California in December 1964, and Palmdale and Edwards AFB served as the primary operation sites for that model until Beale Air Force Base became active in early 1966." according to Wikipedia's Groom Lake entry, again.

One criticism of National Geographic's hour long documentary, is, it's little more than a collection of "old codgers" who are boring to watch. The present writer believes information on U-2 and A-12 programs in early days of Area 51, outweighs its shortcomings and well worth anyone's time.