area 51 loses mystique for some after accusations of hoax 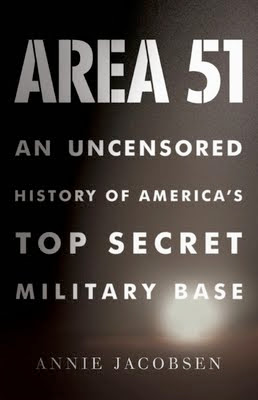 from bookbuzz: Just the term "Area 51" sets UFO theorists trembling with excitement. This week, a book titled Area 51 enters the list at No. 27. Author Annie Jacobsen interviewed 74 people including 32 who worked and lived at the secret Nevada military facility (which the U.S. government has never admitted exists). Area 51 covers the history of the Cold War, but the reason it's climbing the list faster than aliens swarming a spaceship? Jacobsen's jaw-dropping claim about a flying saucer which reportedly crashed in July 1947 in Roswell, N.M. The pilots weren't aliens but Russian or German children and teenagers who were surgically made to resemble the Martians in Orson Welles' 1938 The War of the Worlds radio broadcast, the book claims. Jacobsen says Stalin may have secretly collaborated with Nazi Josef Mengele in hopes of spreading panic in the U.S.