from atlanta journal-constitution: Six years ago, Argenbright was a pariah. Two of the four hijacking teams passed through screening stations manned by Argenbright Security. U.S. Attorney Gen. John Ashcroft later called a press conference to condemn the company for “an astonishing pattern of crimes that could have directly jeopardized public safety.” 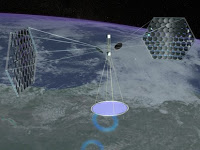 from ap: While great nations fretted over coal, oil and global warming, one of the smallest at the U.N. climate conference was looking toward the heavens for its energy… Unlike other ideas, however, one this year had an influential backer, the Pentagon, which is investigating whether space-based solar power – beaming energy down from satellites – will provide “affordable, clean, safe, reliable, sustainable and expandable energy for mankind.”

from usa today: Call it vocational education for the 9/11 generation. The nation’s first comprehensive high school homeland security program, a three-year course to help kids land jobs in the growing anti-terrorism industry, is in its infancy… The program, started at Maryland’s Joppatowne High School with 61 sophomores, provides “an opportunity for kids to see relevance to being in school,” says Frank Mezzanotte of the Harford (Md.) County Public Schools. “It gives kids additional options.”

from upi: The British government will soon release previously classified details regarding hundreds of reported sightings of unidentified flying objects. The Sunday Telegraph said Sunday that this coming spring, the Defense Ministry will release to the general public 160 files about alleged UFO sightings. Since the British government department began keeping records about the unusual reports in 1950, more than 10,000 sightings have been recorded.