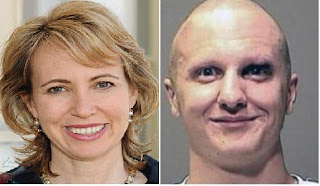 The shooting of Congresswoman Gabrielle Giffords in a Tucson parking lot in January, has fallen under suspicion of two independent investigators, Ed Chiarini and Stephanie Sledge. A photoshopped mug shot of Jared Lee Loughner hints something is amiss? Is the photo a sinister psyop lending the alleged shooter an evil clown-like appearance, borrowed from Glenn Beck? Chiarini suspects a staged event, based on school shooting drill or Exercise Plan (ExPlan), a link is at Wellaware1.com. A drill resembling Tucson shooting, would be termed a Full Scale Event(FSE) in Chiarini's opinion. The investigation has led to Radian-Helix, a media company and its employees who resemble people at the scene. An early February interview of Chiarini is available here.

Sledge's website, The Government Rag, provides a wealth of videos, interviews and recent article, "Jared Lee Loughner Case begins to unfold in opposite direction". Power Hour's Joyce Riley follows the Sledge and Chiarini investigation closely with most recent interviews here and here.
These are brave souls to take on a politically volatile event. Chiarini hints at more conspiracy with reference to a full-size space shuttle model, also leaked report of problems with last mission. The last shuttle launch is scheduled for April 29th, whose commander is also Gifford's husband, Mark Kelly. It's a full plate and if Arizona shooting was staged, present writer hopes no one was killed as reported!