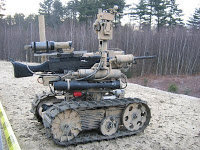 from danger room: A recent news report that armed robots had been pulled out of Iraq is mistaken, according to the company that makes the robot and the Army program manager.

We linked last week to a Popular Mechanics article reporting that the armed SWORDS robots, made by Foster-Miller, has been pulled out of Iraq after several incidents when the robot’s gun started swinging around without being given a command…

One problem: SWORDS wasn’t yanked. “SWORD is still deployed,” Kevin Fahey, the program manger quoted in the original article, tells DANGER ROOM in an e-mail. “We continue to learn from it and will continue to expand the use of armed robots.”

“The whole thing is an urban legend,” says Foster Miller spokesperson Cynthia Black, of the reports about SWORDS moving its gun without a command.

(i can’t believe popular mechanics got something so wrong…)