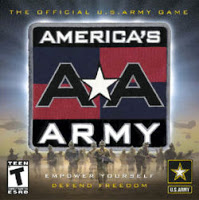 from wired: The U.S. Army, after figuring out that a) it needs more bodies to fill up its ranks, and b) lots of the ideal sorts of bodies play video games, has signed a $2 million sponsorship deal with the Global Gaming League‘s website as a means to recruit readers. Eighty percent of GGL’s readers are 17-24 year old males, the dream demographic for Army recruitment.

Gary Bishop, in charge of marketing for the Army, thinks that the deal provides a unique opportunity to tell the Army story:

It’s not all about combat. Being in the Army is about driving trucks, welding, nurses and computers. If we have an opportunity to tell the Army story, we may have better influence.

So. In the middle of a war, if you join the army you can expect some truck-driving and maybe some nurses who, hopefully, won’t be bandaging you up. Beginning in June, the Army will sponsor a specific section of the GGL site, which will house 15 different games and provide visitors with the chance to compete in monthly America’s Army tournaments.