as oil and food prices rise, arab states buy up farmland in africa 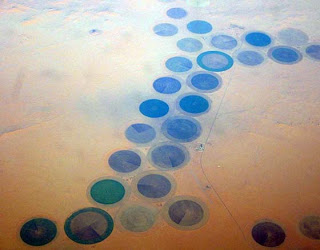 from green prophet: In response to the recent food riots in Algeria and Tunisia, and to rising oil prices (the price/barrel of crude is, once again, nearing $100) some Arab states (including Saudi Arabia and the United Arab Emirates) have been buying-up farm land in parts of Africa. In late 2010, the UN Food and Agricultural Organisation announced that food prices had reached a higher level than even those back in 2008 (which resulted in food riots in several places around the world). Hedging their bets against a food shortage in their own countries, these wealthy Gulf region nations are hoping to put into production the vast swaths of ag-land they've recently purchased in Ethiopia, Sudan (and the smaller tracts they've grabbed in Kenya and Mozambique) - with the yields intended to feed their own -- exclusively. Critics, like the NGO GRAIN, argue that this land grab will displace small African farmers, and only add to that continents' own food shortage problems.