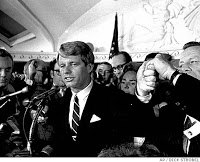 the assassination of rfk: 40 years of disinformation

from 9/11 blogger: Just as surely as the American public, and the rest of the world, was not told the truth about the assassinations of JFK and MLK, so it is with RFK, Robert F. Kennedy. Now, 40 years later, new scientifically derived evidence has come to the fore in the form of digital acoustic analysis. But even before this analysis was available, a host of anomalies arise from the events of that day, as well as the strange mental condition of Sirhan Sirhan, which may be the indication of a mind-controlled asset.

June 5, 2008, marks 40 years of disinformation about the death of RFK. To mark the occasion, here is another video from Ralph Cole's amazing collection. Cole is the powerhouse behind justicevision.org,* a great collection of video footage, that has captured some of the most important speakers on these recurring events of deception. 9/11 was far from the first, but if we work hard enough, maybe it will be the last. It's educational to know about the events that precede 9/11, to note the similarities, and learn from them. Because you can be sure that the perpetrators do. 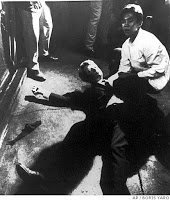 from san francisco chronicle: The assassination was over in a few seconds. In the photograph of that moment, Bobby Kennedy, his eyes open and glazed, lies on his back on a hotel pantry floor, his head cradled by a busboy dressed starkly in white - a tableau that seems almost angelic were it not so brutal.

Less than 26 hours after being shot early on June 5, 1968, right after winning the California presidential primary, Kennedy was dead. He was 42. Three major assassinations rocked America in the 1960s. Two of the assassins - Lee Harvey Oswald, the killer of John F. Kennedy, and James Earl Ray, who shot Martin Luther King Jr. - are dead. But Sirhan Sirhan, convicted of killing Robert F. Kennedy 40 years ago this week in the Ambassador Hotel in Los Angeles, is living out his days in the California state prison at Corcoran. He is 64 and has never fully explained what happened that night other than to say he can't remember it.

Sirhan was a seemingly unremarkable man. He was a Palestinian who was raised in the Middle East until he was 12, when his family settled in Southern California. Before the Kennedy assassination, he held a series of menial jobs and at one point worked at the Santa Anita racetrack and had hoped to be a jockey.

After Los Angeles police found his diary, in which he had written, "RFK must die," investigators concluded that he was angry about Kennedy's support for Israel and somehow had tied the assassination date - he wrote that Kennedy must be killed "before 5 June 68" - to the one-year anniversary of the Six-Day War...

Documents and other information about the Robert Kennedy assassination can be found at these Web sites:

A new documentary, "RFK Must Die," will be screened at 9:20 tonight at the Roxie Theater, 3117 16th St., San Francisco. Another documentary, "Conspiracy Test: The RFK Assassination," ran on the Discovery Times Channel last year and can be found on YouTube.

update: john pilger confirms multiple rfk shooters
from 9/11 blogger: Amy Goodman made note of the 40th anniversary of the assassination of RFK today with a tribute that included a useful history of the life and times of RFK, but Goodman also parroted the establishment line that Sirhan Sirhan killed RFK.... Goodman then talked to John Pilger on the telephone, and Pilger made the stunning admission that not only was he there that night 40 years ago, he heard multiple shots, says that the shots kept coming even after Sirhan had been wrestled to the ground, and he told this to the FBI. Something tells me that Pilger would strongly agree with the recently released acoustic evidence.