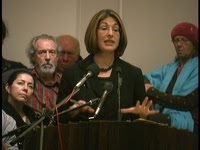 from portland indymedia: Naomi Klein, whose most recent book, “The Shock Doctrine: the Rise of Disaster Capitalism” has become an international best-seller, spoke to an overflowing house in Portland Oregon on Friday, December 7, 2007.

This was an enlightening presentation, but it did so by drawing together many ideas and common insights lying loose in the minds of the audience and directed them laser-like, to obvious conclusions. She weaves a fabric from many threads available to all who dig beneath the veneer of Corporate Media complicity in the social engineering which passes for political and religious belief systems.

related: naomi klein on ‘presswatch’
from kboo: Naomi Klein discusses imperialism, torture, and the Chicago School of predatory economists with Theresa Mitchell. Preceded by a discussion of the current propaganda preparing the public for war with Iran in the Spring.