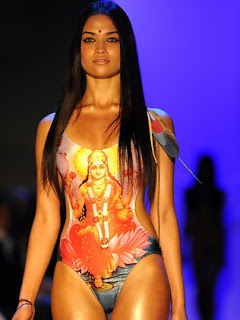 from telegraph: Upset Hindus have welcomed apology from an Australian swimwear label over the depiction of image of Goddess Lakshmi on swimwear at Rosemount Australian Fashion Week in Sydney last week.

Indian activists of the right-wing Hindu organisation Shiv Sena held photocopies of models wearing swimwear featuring Lakshmi as they burned an Australian flag during a demonstration in Amritsar.

A statement attributed to Lisa Blue Swimwear, headquartered in Byron Bay said: "We would like to offer an apology to anyone we may have offended and advise that the image of Goddess Lakshmi will not appear on any piece of Lisa Blue swimwear for the new season, with a halt put on all production of the new range and pieces shown on the runway from last week removed."