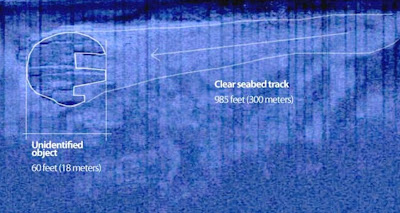 Mail Online article provides fascinating new info on anomalous object dubbed 'the Millenium Falcon' for its likeness to the Star Wars spacecraft. The object is 60 ft in diameter and lies under 285 feet of water on Baltic Sea floor in the Botnia Gulf between Sweden and Finland. Article adds some tantalizing tidbits, "Professional diver Stefan Hogerborn, part of the Ocean X team which is exploring the anomaly, said some of the team's cameras and the team's satellite phone would refuse to work when directly above the object, and would only work once they had sailed away. He is quoted as saying: 'Anything electric out there - and the satellite phone as well - stopped working when we were above the object. And then we got away about 200 meters and it turned on again, and when we got back over the object it didn’t work.'" Another Ocean X team Dennis Åsberg declared: "'I am one hundred percent convinced and confident that we have found something that is very, very, very unique.'" Electrical properties of object imply something other than natural phenomenon, at the least, make it less likely. It also resonates with UFO-lore of electric devices failing when encountering UFOs. Ground Zero Live Host Clyde Lewis suspects Baltic Anomaly may be Nazi Saucer in recent article, "Spøkelseraketter – THE NAZI GHOST MACHINE." It's a possibility greater than the idea of an ancient alien spacecraft.