banned in US, horse slaughter just moves across borders 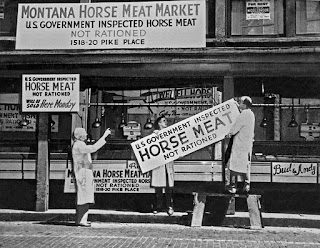 from nytimes: The closing of the country’s last meat processing plant that slaughtered horses for human consumption was hailed as a victory for equine welfare. But five years later just as many American horses are destined for dinner plates to satisfy the still robust appetites for their meat in Europe and Asia. Now they are carved into tartare de cheval or basashi sashimi in Mexico and Canada. That shift is one of the many unintended consequences of a de facto federal ban on horse slaughter, according to a recent federal government study. As the domestic market for unwanted horses shrinks, more are being neglected and abandoned, and roughly the same number — nearly 140,000 a year — are being killed after a sometimes grueling journey across the border.