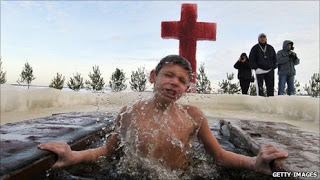 from bbc: When an amateur video of a screaming, naked boy being plunged by a priest into an ice hole in Siberia appeared on the web, it caused a massive outcry in the Russian media and blogosphere. The boy appears to be no more than five or six years old.

At first, he is seen wrapped up in a blanket, already crying, as adults in fur coats carry him towards an ice hole carved in a frozen lake or river. He is then unwrapped and fully immersed three times into the water - obviously against his will - while an Orthodox priest conducts a baptism ceremony.

"Where did this happen? Who is the priest? Who are the parents?" wrote one blogger, stating his determination to gather information about the "sadistic" incident and make it public. The ceremony is reported to have taken place not far from a Siberian city of Irkutsk on 19 January, the Russian Orthodox festival of Epiphany, commemorating the baptism of Jesus Christ.

Religion was frowned upon during Soviet times, but since the fall of Communism it has made a big comeback. There is now no shortage of people of all ages, eager to fast during Lent, mark the resurrection at Easter with traditional bread, get married in church and christened in holy water. And since Jesus Christ was baptised in January - according to the Russian Orthodox church - many regard stripping down and diving into icy water as a good way to erase their sins.