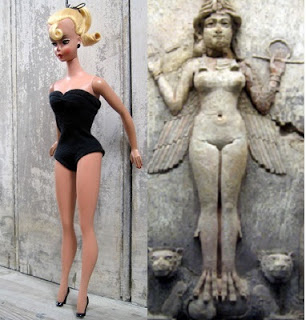 Barbie’s Sordid Past as a Sex Doll

Is it Barbie in the picture (left)?  You would be incorrect if you thought so.  It's actually Lilli, a German doll intended for an adult market.  In "Barbie Exposed,' Sandra Barr provides the skinny on Barbie's sexual history:

"Lilli ... was originally a cartoon character for the tabloid Bild-Zeitung in Hamburg Germany. In 1953 Bild-Zeitung contacted Max Weissbrodt from the toy company O&M Hausser in Neustadt/Coberg with a view to creating and marketing a Lilli doll, two years later in 1955 Lilli was launched, she remained on sale until 1964. Between 1955 and 1964 up to 130,000 were produced and Lilli dolls are now much sought after by collectors... Lilli was sold to men in smoking shops and bars, her large breasts, small waist and long legs coupled with her expression, were apparently sexually gratifying to Germen men...In 1956 [Ruth] Handler [who introduced Barbie] was on vacation in Europe, while in Switzerland she purchased a number of the Bild Lilli dolls, she was later to claim that she did not know it was a 'sex doll', I expect the large breasts, long legs flame red nails and pout all seemed innocent enough to her!"

Barbie and Ken are named after Handler's children. Barr also suspects Lilli was named after Lillith:

"The very name 'Lilli' derives from the demonic entity Lilith feared and revered from antiquity.

She first appears in Sumer around 4000 BC, where she appeared in a class of storm demons or spirits as 'Lliltu'. By 700 BC she was known as Lilith, Isaiah 34:14 refers to her as a 'Screech Owl'.

The Alphabet of Ben-Siri is an anonymous work written in Hebrew and Aramiac between the 8th and 11th centuries, it claims that Lilith was the first wife of Adam, and she left Eden in a strop after refusing to lie beneath Adam during sexual intercourse, Adam in turn refused to lie beneath her. According to their commentary she took refuge on the coast by the Red Sea, she took on many demons as her lovers and had countless children.

At the behest of Adam, God summoned three Angels to bring her back to Eden, when she refused to return they threatened to murder a hundred of her children daily until she complied, she responded with a threat of her own, and she vowed to torment the children of Adam and Eve for eternity.

Her children are known as the Lilin, and still a hundred are said to die daily, as mentioned, Lilith’s retaliatory threat also still stands.

Lilith moves with the wind and she brings disease, misery and death, as we will see, the German Lilli also crossed oceans, she cannot be directly blamed for causing death, but she has certainly influenced nations."

How many Barbies sold?  The figures are belowl:

"In the first year of production 351,000 Barbie’s were sold at $3 each, it was three years before Mattel could keep up with demand, by 2002 over a billion Barbie’s had been sold in 150 countries. Those first Barbie’s now command up to $5000 each!
In 1961 a boyfriend was created for Barbie, and Ken was born... In 1964 Mattel acquired the rights to the Bild Lilli doll and production in Germany of Lilli ceased.!"

The sexual history of Barbie exposed to the public. Barbie started out as an adult sex doll in Germany!