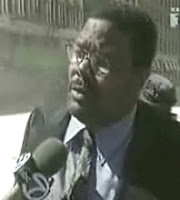 UPDATED SEPT 17 4:05 PM CST
NYC Housing Authority spokesman Howard Marder has now officially confirmed that Barry Jennings indeed passed away approximately a month ago after several days in the hospital, matching confirmations from several other employees at the Housing Authority. Marder commented that Jennings was a great man, well liked by everyone at the Housing Authority, and that he would be missed. No other details were available.

from aaron dykes: Barry Jennings, a key 9/11 eyewitness who was an emergency coordinator for the New York Housing Authority, has passed away at age 53 from circumstances not yet disclosed. A spokesperson for the Housing Authority has now confirmed his death, after weeks of rumors circulating online, but refused to give any further details. This office has not yet been able to contact anyone in the Jennings family and the official cause of death is not yet known, but online comments have reported the date of death as August 19, 2008.It is very unusual that a prominent — and controversial– 9/11 witness would die only days before the release of NIST’s report on WTC7 and shortly after a firestorm erupted over his testimony that he heard explosions inside the building prior to collapse of either tower and that there were dead bodies in the building’s blown-out lobby.The BBC aired The Third Tower in July in attempt to debunk Barry Jennings’ account– which is both contradictory and damaging to the official 9/11 story– by making issue over whether or not he said he “saw” dead bodies in the lobby. Yet Jennings own statement in an exclusive interview with Dylan Avery and Jason Bermas– which has not been denied– was: “The fire fighter who took us down kept saying, ‘Don’t look down.’ And I said, ‘Why.’ And we were stepping over people– you know, you can feel when you’re stepping over people.” Now the release of Jason Bermas’ Fabled Enemies is giving further exposure to Jennings’ controversial account. The film features a full interview with Barry Jennings, as well as the statements he and Michael Hess, who was also trapped with him inside WTC7, made to news media on the day of the attacks. Barry Jennings reiterated in the exclusive interview his confusion over the explanation for WTC7’s collapse– given that he clearly heard explosions inside the building:

“I’m just confused about one thing, and one thing only– why World Trade Center 7 went down in the first place. I’m very confused about that. I know what I heard– I heard explosions. The explanation I got was it was the fuel-oil tank. I’m an old boiler guy– if it was a fuel-oil tank, it would have been one side of the building.”

That interview was not released until June 2008 at the request of Mr. Jennings, who had received numerous threats to his job and asked that it be left out of Loose Change: Final Cut because of those threats. Jennings statements have lit fire to questions about what really caused the sudden collapse of WTC7 just as NIST had hoped the release of their report would quash widespread beliefs that the building was brought down by controlled demolition. News of Jennings’ death comes on the heels of losing another 9/11 hero and eyewitness– Kenny Johannemann, who reportedly committed suicide 12 days before the seventh anniversary of 9/11. Johannemann is credited with saving at least one man’s life on 9/11 and was also a witness to explosions in the towers. NIST’s report, as well as that of the 9/11 Commission (which did not even mention WTC7), completely ignored statements from the building leaseholder Larry Silverstein as well as numerous police, fire fighters and other eyewitnesses who have testified that they were warned about the building’s collapse and told to get back. One rescue worker even heard a countdown for the building’s implosion. Unfortunately, Barry Jennings, whose testimony was ignored by the 9/11 Commission, can no longer raise questions personally about his experience inside WTC7, but his account will remain on the record and available in-full on the Fabled Enemies DVD so that what he witnessed about 9/11 cannot be ignored.flashback: 9/11: wtc7, barry jennings, nist leak & bbc hit piece