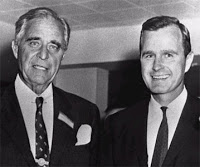 from propaganda matrix: A BBC Radio 4 investigation sheds new light on a major subject that has received little historical attention, the conspiracy on behalf of a group of influential powerbrokers, led by Prescott Bush, to overthrow FDR and implement a fascist dictatorship in the U.S. based around the ideology of Mussolini and Hitler.

In 1933, Marine Corps Maj.-Gen. Smedley Butler was approached by a wealthy and secretive group of industrialists and bankers, including Prescott Bush the current President's grandfather, who asked him to command a 500,000 strong rogue army of veterans that would help stage a coup to topple then President Franklin Delano Roosevelt.

According to the BBC, the plotters intended to impose a fascist takeover and "Adopt the policies of Hitler and Mussolini to beat the great depression."

The conspirators were operating under the umbrella of a front group called the American Liberty League, which included many families that are still household names today, including Heinz, Colgate, Bird's Eye and General Motors. 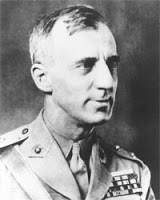 Butler played along with the clique to determine who was involved but later blew the whistle and identified the ringleaders in testimony given to the House Committee on un-American Activities.

However, the Committee refused to even question any of the individuals named by Butler and his testimony was omitted from the record, leading to charges that they were involved in covering the matter up, and the majority of the media blackballed the story.

In 1936, William Dodd, the U.S. Ambassador to Germany, wrote a letter to President Roosevelt in which he stated,

"A clique of U.S. industrialists is hell-bent to bring a fascist state to supplant our democratic government and is working closely with the fascist regime in Germany and Italy. I have had plenty of opportunity in my post in Berlin to witness how close some of our American ruling families are to the Nazi regime.... A prominent executive of one of the largest corporations, told me point blank that he would be ready to take definite action to bring fascism into America if President Roosevelt continued his progressive policies. Certain American industrialists had a great deal to do with bringing fascist regimes into being in both Germany and Italy. They extended aid to help Fascism occupy the seat of power, and they are helping to keep it there. Propagandists for fascist groups try to dismiss the fascist scare. We should be aware of the symptoms. When industrialists ignore laws designed for social and economic progress they will seek recourse to a fascist state when the institutions of our government compel them to comply with the provisions."

The proven record of Prescott Bush's involvement in financing the Nazi war machine dovetails with the fact that he was part of a criminal cabal that actively sought to impose a fascist coup in America.

Prescott did not succeed but many would argue that two generations down the line the mission has all but been accomplished.

In his documentary film Martial Law, Alex Jones interviews John Buchanan, who was instrumental in uncovering the documents tying Prescott Bush to the financing of the Third Reich. Watch a clip above. The subject is also covered in Alex's upcoming film, End Game, which includes rare video of Smedley Butler's testimony.

Click here to listen to the BBC Radio 4 investigation.