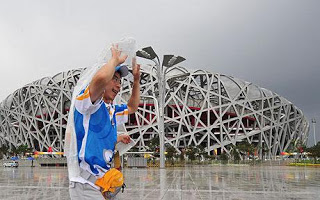 from financial times: Of all the Chinese officials working behind the scenes to produce a flawless Olympic opening ceremony on Friday evening, few face a task as daunting as those in charge of making sure it does not rain. Staff from China’s “weather modification” departments have deployed aircraft, artillery and rocket launchers to ward off rain before the three-hour ceremony in Beijing’s spectacular but roofless “bird’s nest” stadium.

from cnet: Radio frequency identification technology will be facing one of its first major tests during the Beijing Olympics, taking care of ticketing for the estimated 3 million athletes, journalists, and spectators. Despite the Chinese government's current uptight security measures, the RFID chips embedded in Olympics tickets will be not carrying personal information. Instead, they'll be linked to a remote database, designed primarily to combat counterfeits, facilitate check-in, and so on.

Following the recent food scare originating from China, local authorities will also be using an RFID-based food management system to maintain close tabs on food production, processing, and deliveries. The arrangement may be a lot more significant than the one mentioned above, considering the well-being of close to 10,700 international athletes and the daunting logistics of pulling off events across 31 competition venues throughout the country. 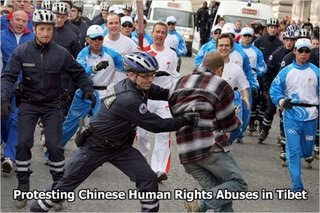 from existentialist cowboy: Not since 1936 has a police state hosted an Olympics amid such international hype. Still espousing 'communism', the Beijing regime that brought you the Massacre at Tiananmen Square is easily bought off, at least temporarily, by makers of sneakers and other shameless exploiters of labor and humanity. The world has not seen extravagance on this scale since another tyrant - Adolph Hitler - tried to exploit the Olympics to put a smiley face on Nazism.