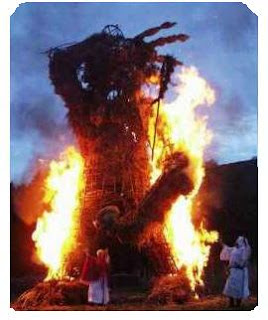 Millions of viewers were unwitting participants in ancient occult holiday, Beltane, with the May 1st report on the death of Osama Bin Laden. The report served as the festival's symbolic sacrifice. However, the alternative media believes that Bin Laden has not been among the living for the past 10 years; and most likely died in late 2001 at Tora Bora. But again, reality is not our concern - only rules to abide by - and sacrifice can be symbolic. The Vigilant Citizen, a leading website on occult symbolism, informs us in the article, 'Why the Death of the Man Who Was Not Behind 9/11 Was Announced on May 1st': "The origins of the Beltane festival can be traced back to the celebration of the Sumerian God Enlil – who is known to us as Baal. The name Beltane (pronounced “B’yal-t’n”) is said to originate from the word Baal. Celebrations of the Beltane festival are very similar to ancient rituals celebrating the ancient god. The mysterious similarities between these seemingly distant cultures could be the subject of an entire article. One thing is for sure: Baal is an important figure in Illuminati lore."

"May 1st, or May Day, was considered by several cultures to be an important holiday, especially in occult circles due to celestial alignments. In Illuminati lore, it is regarded as the second most important day of the year. In fact, the Order of the Bavarian Illuminati was founded on May 1st 1776."

"In 2011, Bin Laden’s usefulness to the Agenda has ran its course. Furthermore, the Obama administration needed an exploit to boost its poll ratings until the next elections. Consequently, in a classic combination of occult rituals with pragmatic politics, the death of Bin Laden was announced on May 1st 2011 with triumph and jubilation. Through CNN, NBC, CBS, ABC and FOX, millions of viewers rejoiced at the death of man in the same matter ancient peasants rejoiced at the offering of human sacrifices to Baal. In a dumbed-down, politicized and 'Illuminatized' version of the Beltane Festival, the masses have celebrated the ritual sacrifice of a man and, without even realizing it, partook in one of the Illuminati’s most important holidays."

Vigilant Citizen summarized Beltane Festival with acumen. This year's celebration proved a pragmatic combination of occult ritual and political expediency. Hats off to Vigilant Citizen for sharing these insights!